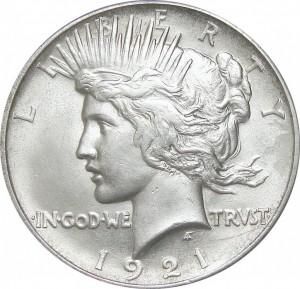 Noted for being the last circulating U.S. dollar coin struck in silver, this $1 coin was released the same year the Morgan dollar was discontinued.

Read on to learn more about the Peace dollar’s history, design, and mintage.

During World War I, millions of silver dollars were melted for the war effort, representing nearly half of all the Morgan dollars ever struck. In order to replace the coins that were melted, the United States Mint was required to strike millions of new silver dollars following the passage of the Pittman Act in 1918.

In 1921, it began to do so, using the older Morgan dollar design. Coin collectors began lobbying the Mint to produce a coin to memorialize the end of World War I. As a result, the U.S. government held a competition to create a coin design emblematic of peace.

The winning entry was designed by Anthony de Francisci. The obverse features the head of Lady Liberty, facing left. Her hair is in a bun, with several locks flowing in the wind. Liberty wears a tiara with rays, and the word “Liberty” appears above her head. The reverse of the coin depicts a bald eagle clutching an olive branch with the word “peace.”

Although originally intended as a commemorative coin, it was put into circulation as the Peace silver dollar. Like its predecessor, the Morgan silver dollar, it contains 90% silver and 10% copper in a 38.1mm diameter coin. The dollar’s total weight is 26.73 grams, and the silver content is 0.77344 troy ounce.

In 1928, production of the Peace dollar ceased, although the coin was reintroduced in 1934 and 1935. In 1965, more than 300,000 Peace dollars were minted with a 1964 date. However, they were never issued due to concerns over silver hoarding due to high silver prices, and it is believed that all of them were melted down.

Today, Peace dollars – the last true silver dollar – are highly collectible. In particular, those bearing a date of 1921 or 1928, or a 1934 D that has been struck with a double die, are particularly sought after by collectors. Many collectors seek a complete set, which includes 24 different issues spanning 1921-1935 and produced in San Francisco, Denver, and Philadelphia.

In general, silver peace dollars are limited in supply, making them among the most collectible U.S. silver dollars. On the other hand, some low-grade Peace dollars minted in ‘common’ years may be worth more for their precious metal content than their numismatic value.