Also known as the Silver Vienna Philharmonic, this coin is minted by the 800-year-old Austrian Mint. The historic Austrian Mint is known for minting some of the most beautiful coins across Europe. It traces its roots to 1194, when a silver ransom paid to free the captured King Richard the Lionhearted of England was used to create silver coins for the Austrian empire. Today, the Austrian Mint is a leading producer of Euro coinage and gold and silver bullion coins, and is noted for its exquisite craftsmanship and breathtaking coin designs.

The Austrian Philharmonic coin is coveted across Europe and abroad, and is highly prized by collectors and precious metal investors. It carries the same design as the Austrian Gold Philharmonic coin, which was the best-selling gold coin worldwide in 1992, 1995, and 1996. In response to demand from investors and coin collectors, the Austrian Mint began minting the same coin in silver beginning in 2008.

First introduced on February 1, 2008, this coin is growing increasingly popular each year. Annual mintage is driven by demand, which could make the earliest years of the coin exceedingly collectible in the years to come. The Austrian Mint does not publish annual mintage figures. When leaving the mint, the coins are shipped in 20-coin tubes packaged in sealed, 500-coin Monster Boxes.

Each Austrian Silver Philharmonic coin carries a face value of 1.5 euro. It is the first silver bullion coin to carry a face value in euros. These collectible coins are legal tender only in Austria, unlike most euro coins, which are legal tender anywhere within the Eurozone. Its actual market value is typically many times the face value, owing to the coin’s silver content. 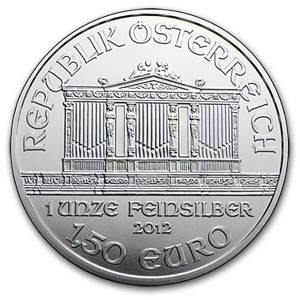 However, Austrian silver bullion typically carries a lower premium than other silver bullion coins, such as American Silver Dollars, making them popular among investors. The Austrian Silver Philharmonic coin can frequently be found at prices that are just a few dollars over the silver spot price.

The exquisite design of this coin has made it one of the most popular silver bullion coins among coin collectors. With a nearly identical design to the popular Austrian Gold Philharmonic coin series, each coin commemorates the Vienna Philharmonic orchestra. The coin’s designer is Thomas Pesendorfer. The obverse side is stamped with the orchestra’s name (“Wienier Philharmoniker,” or Vienna Philharmonic) and “1 Unze Feinsilber,” which means “1 ounce fine silver.”

It also features a montage of orchestra instruments to represent the rich musical and cultural heritage of the country. Meanwhile, the reverse features imagery of the Great Organ located in Vienna’s “Golden Hall,” where the Vienna Philharmonic Orchestra performs. This side is also stamped with the country of issue, silver weight, and legal tender value.